"When Jeremiah had finished telling the people all the words of the Lord their God — everything the Lord had sent him to tell them — Azariah...Johanan...and all the arrogant men said to Jeremiah,

‘You are lying! The Lord our God has not sent you to say, “You must not go to Egypt to settle there.” But Baruch son of Neriah is inciting you against us to hand us over to the Babylonians, so they may kill us or carry us into exile to Babylon.’

So Johanan…all the army officers and all the people disobeyed the Lord’s command to stay in the land of Judah. Instead, [they] led away all the remnant of Judah who had come back to live in the land of Judah from all the nations where they had been scattered. They also led away all those whom Nebuzaradan commander of the imperial guard had left with Gedaliah — the men, the women, the children and the king’s daughters. And they took Jeremiah the prophet and Baruch…along with them. So they entered Egypt in disobedience to the Lord and went as far as Tahpanhes." 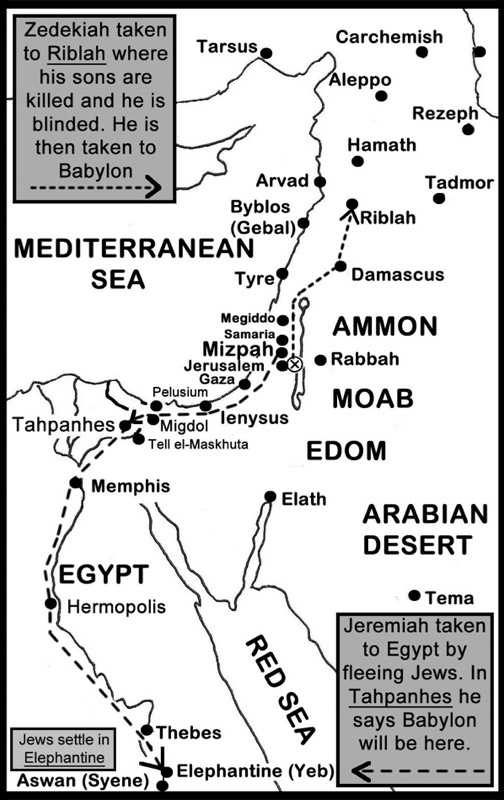 Jeremiah had been speaking to the Jews since 627 BC during the days of King Josiah. It is now 586 BC and Jerusalem has been destroyed, the temple has been burned and the third of three deportations of Jews to Babylon has taken place just as Jeremiah had predicted accurately over a period of 41 years.

Now, a few months after Nebuchadnezzar had returned to Babylon the remnant of Jews that Nebuchadnezzar had allowed to remain in the land of Israel to care for the fields and vineyards come to Jeremiah to ask for divine guidance. Jeremiah agrees to ask God, but warns the people that they must listen and obey the answer the Lord gives them. The people wholeheartedly promise to listen to the Lord speak through his prophet Jeremiah who has accurately spoken to this rebellious people for 41 years.

Jeremiah returns with his answer from God that commands the people to stay in the land of Israel, obey Nebuchadnezzar and to be encouraged because the Lord will care for them here in Israel.As it has been for over four decades of Jeremiah’s ministry, arrogant men rise up against Jeremiah and deceitfully mislead the people. They accuse Jeremiah and his upper class scribe Baruch (who formerly had served as a royal scribe to King Josiah) of having ulterior motives that they sum up in these words of illogical accusation:

“Baruch son of Neriah is inciting you against us to hand us over to the Babylonians, so they may kill us or carry us into exile to Babylon.” – Jeremiah 43:3

The Jews continue to reject Jeremiah even after 41 years of his accurate teaching and prophesying by forcing everyone including some of the king’s daughters, Jeremiah and Baruch to leave the land of Israel and flee to Egypt.

This decision by the rebellious Jews to follow the deception of the arrogant men is like jumping from the frying pan into the fire, except much worse. The Jews who are left in the land are no longer in the frying pan, because they are under Nebuchadnezzar’s rule and in the God’s will. But, by going to Egypt they are entering the land that will be attacked and destroyed by Nebuchadnezzar in 569 BC in fulfillment of Ezekiel’s prophecy given on April 26, 571 in Ezekiel 29:19.

When Jeremiah did arrive in Egypt late in 586 BC or early 585 BC he marked the spot on the brick pavement at the entrance to Pharaoh’s palace in Tahpanhes where Nebuchadnezzar will set his throne when he comes to destroy Egypt. (See Jeremiah 43:8-13)

Once again, the Jews should have listened to Jeremiah.

I will be patient today in a time when I will want to lash out and blame someone.
I will deal with the situation logically, and refrain from being driven by emotions.

Compassion for the poor and needy

Excavation at Shiloh in 2012 (Shiloh details)

A map details the location of Deuteronomy 34 when Moses viewed the Promised Land from Mount Nebo on the east side of the Jordan.

"One of the legacies that we've had from the kind of evangelism that's gone on in our country is that we believe salvation is attached to a decision, but the assurance of salvation has nothing to do with a decision in the past; it has to do with what's going on in the present. Jesus put it this way in John 8:
'If you continue in My word, then you are My real disciple.'
It's always continuous;
it's always present tense."

Evolution cannot explain love. Neither can it explain God’s expectation to love others as you love yourself. Mankind was created in the image of God and God is love. Evolution would produce self-seeking survivalist who needed to destroy and devour others.

The Arad Ostracon is an inscribed potsherd dated in its inscription to the year 597 BC. It uses the exact manner of dating as Ezekiel does in Ezekiel 1:1-2; 8:1; 20:1, etc. The Arad Ostracon and Ezekiel both use the preposition “in” (Hebrew b) with the number attached to the name of the month. Ezekiel opens his book in the year 593 BC. It is important to notice that Ezekiel’s method of dating his prophecies in 593 BC matches the dating process used in Israel in 597 BC as is seen on the Arad Ostracon. Ezekiel was taken captive from Israel in 597 BC. (Details 1, 2, 3)

"A wise man fears the Lord and shuns evil, but a fool is hotheaded and reckless."
- Proverbs 14:16

The greatest miracle is salvation. The godliest spiritual manifestation is the transformed soul.
Zechariah 5 New International Version (NIV)
The Flying Scroll
5 I looked again, and there before me was a flying scroll.
2 He asked me, “What do you see?”
I answered, “I see a flying scroll, twenty cubits long and ten cubits wide.”

3 And he said to me, “This is the curse that is going out over the whole land; for according to what it says on one side, every thief will be banished, and according to what it says on the other, everyone who swears falsely will be banished. 4 The Lord Almighty declares, ‘I will send it out, and it will enter the house of the thief and the house of anyone who swears falsely by my name. It will remain in that house and destroy it completely, both its timbers and its stones.’”
The Woman in a Basket
5 Then the angel who was speaking to me came forward and said to me, “Look up and see what is appearing.”
6 I asked, “What is it?”
He replied, “It is a basket.” And he added, “This is the iniquity of the people throughout the land.”